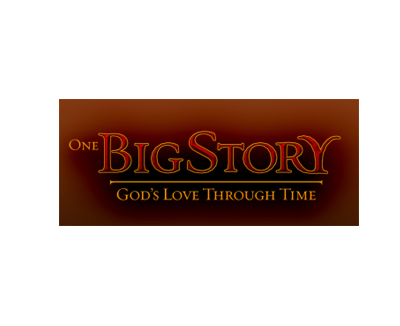 The Bible isn’t just a book of random stories; it’s 66 books written by 40 authors over 1,600 years, and it all comes together to tell One Story. One incredible overarching narrative about God’s loving pursuit of us, His children.

It’s why we believe you have a unique calling as a leader—to do everything you can to tell the best story ever told in a way that connects with the minds and hearts of the next generation. We are not simply trying to get a generation to love the story of God, but to fall in love with the God of the story—the One Big Story.

Here at Orange, every month and with every series, we weave the Big Story into our age-specific curriculum—First Look, 252 Basics and XP3 Students. But there are times, seasons when we feel like it’s important to take a step back and be reminded of the big picture.

That’s why before Orange Conference 2013, we are releasing a new eight-week curriculum called One Big Story. Consisting of individual series, One Big Story is designed to be used for a season either with a specific age group or church-wide with three different age groups—preschool, elementary and middle school/high school students.

Curious? You’ll soon be able to find more info at our website, www.OneBigStory.com, but here’s some FAQs that may answer some questions you have now.

How do I use this?

Each One Big Story series spans all age groups—preschool, elementary, middle/high school students. For eight weeks, you can do a church-wide series to create energy around a singular idea. Or your church has the flexibility to implement a Big Story series in any of the individual age groups.

As an existing Orange subscriber, you can also choose to replace two months from your current curriculum license in order to implement the One Big Story series for your age group.

What all is included?

Many of the components that are included with a normal monthly download of any of our age-specific curriculums (First Look, 252 Basics and XP3 Students).

How much does it cost?

As a current subscriber, you have two options for purchasing One Big Story.

Option 1: You can purchase the series to implement in addition to your normal environments. Pricing is based on the number of children who regularly attend your ministry environment.

Or Option 2: You can replace two months of content from your current curriculum license. As an existing First Look subscriber, you can replace two months of your current annual license. You will be charged only for access to the video enhancements that accompany One Big Story curriculum. (Note: The first replacement month must be 60 days prior to date of purchase of One Big Story series. For example, if you are replacing curriculum for the months of October and November, you must purchase One Big Story before August 1.) With this purchase you get all the resources you would normally get with your Orange curriculum, plus eight Wonder! videos to use in your Large Group environments. If you currently subscribe to Wonder!, you will have the ability to suspend your auto ship of these products for the same two corresponding months. The cost to purchase One Big Story: Turn It Up using the option to replace two months from your current license is $70.

What are the series called?

Turn It Up (Preschool) includes many of the elements of a normal First Look month, plus eight Wonder! videos. (Note: However, the content covers eight weeks, not four.)

Turn It Up (Elementary) includes many of the elements of a normal 252 month, plus eight Feature Presentation story videos. (Note: However, the content covers eight weeks, not four.)

Continuum (Students) includes all the elements of a normal XP3 Students series, plus eight video communicators. (Note: However, the content covers eight weeks, not four.)

The Summer XP in a box is also called Turn It Up. What’s the difference?

I notice that you are calling these series “Series One.” Will there be more series released?

Yes. We have plans to release other strategic series, however our primary focus will still be our ongoing age-specific curriculum. . . so don’t hold your breath for the next series!

To find out more about One Big Story, stay tuned to www.OneBigStory.com. We’ll be launching a new site that will include pricing information and samples in late March/early April.

Topics: How To, Orange Strategy

Kathy lives outside of Atlanta with her awesome hubby, David, and drama daughter, Maggie. She loves all things Disney, unsweet tea, and preschoolers. Kathy's current role is Director of Preschool Curriculum, and she feels amazingly blessed to be part of this incredible team.

How to Fit One Big Story

One Big Story: Turn It Up!